The self-propelled modular flatbed truck SPMT is mainly composed of modules of different specifications, equipped with power unit PPU (Power-Pack-Unit), electrical system, control system, hydraulic system, etc. The PPU has a built-in diesel engine, hydraulic pump set, fuel tank, control panel and other components. The engine drives the hydraulic pump, outputs hydraulic power, and drives the hydraulic motors on each axle (each drive wheel can provide 60 kN of driving force) to make the vehicle run. At the same time, the PPU also provides hydraulic power for the lift of the flatbed truck, steering of all axles, and vehicle control. The combination of the PPU and the flatbed truck is shown in Figure 1.

In order to carry wide-body goods, flatbed trucks can be spliced horizontally to form a combined unit of more than 3 columns. In order to transport ultra-long goods, flatbed trucks can be longitudinally spliced into different numbers of axis modules. For the lifting and lowering of the goods, the flatbed truck can realize the lifting and lowering of 1 500 mm ± 350 mm. Linkage operation (synchronized operation) can be achieved between each independent flatbed truck by connecting the control systems of each vehicle, and the single-wheel axle can independently rotate +100°/-130°. Each axle rotates by a corresponding angle around the set rotation center, so that the whole vehicle group can achieve linear translation in any direction and 360° in-situ rotary motion. 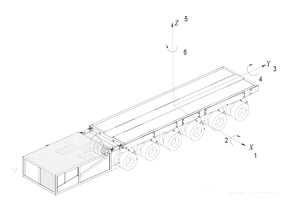 As shown in Figure 2, 2, 4, and 5 degrees of freedom can be realized through SPMT support system, and precise operation control can be realized through man-machine dialogue. Each side of the hydraulic oil circuit of the SPMT flatbed support system consists of two pipelines, which supply oil to the far end (front end) and the near end (rear end) respectively. There are 4 independent support pipelines on both sides, and each pipeline is independently connected to a divided support area at the set support point, thus forming four independent support areas in the XY plane as shown in Figure 2. 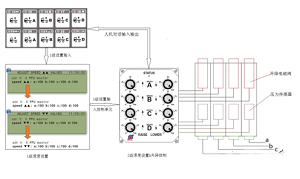 The drive wheels of SPMT drive system are evenly distributed around the geometric center of the flatbed. The driving force is provided by the hydraulic motor at the wheel side, and the buffering can be minimized during the driving process. According to the driving speed, it can be divided into normal mode and micro-travel mode. In the normal mode, the throttle (manual control) controls the engine speed to control the output pressure and flow of the hydraulic pump to control the hydraulic motor speed. In the micro-travel mode, the system input setting can be performed. At a certain speed, it can automatically control and drive at a constant speed, and theoretically, the micro-travel speed can be close to infinitely small.

To sum up, the SPMT drive and steering system can enable the vehicle group to achieve micro-translation and rotation in any direction in the plane, and can achieve 1, 3, and 6 degrees of freedom movement as shown in Figure 2.

From the above analysis, it can be seen that through the support, steering and driving system of SPMT, the motion of all degrees of freedom as shown in Figure 2 can be realized, and the theoretical driving speed of each degree of freedom can be infinitely small, combined with them in the X-Y plane, a large number of arbitrary combinations can be combined. It can install and position large-scale and large-mass modular components.